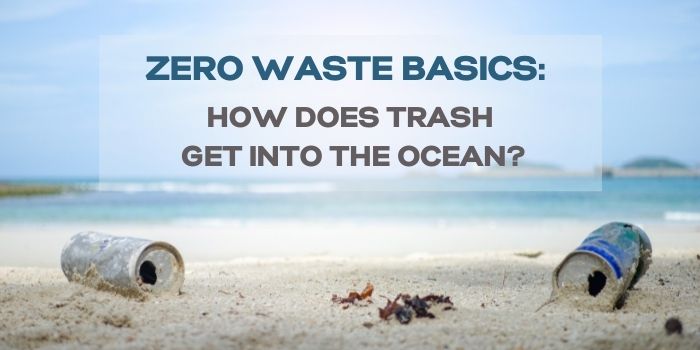 We all hear about how our oceans and waterways are polluted with plastic and other forms of trash, but the chances are that you or anyone you know throws their waste in the sea.

So how does it get there?

Today we’re going to explain how plastic winds up in our oceans and how it impacts our health and environment. We will also shed some light on how much trash there actually is in our waterways and the steps we can take to decrease that number dramatically.

Becoming educated about this kind of stuff is vital, especially if you’re planning on introducing a zero-waste lifestyle for you or your loved ones.

This post contains affiliate links which may earn us a small commission.

How Much Trash Is In The Ocean?

It’s estimated that approximately 8 million tonnes of plastic get dumped in our oceans each year – that’s crazy!

That’s pretty much equivalent to having at least one truckload of trash dumped into the sea every minute.

While this may already seem like a lot to you, know that this number is expected to quadruple by 2050!

To conclude, there is an astronomically high number of plastic waste and trash in our seas – impacting sea life and causing issues for our environment.

How Does Plastic Affect The Ocean?

Keeping in mind that the ocean covers about 71% of the earth’s surface – there isn’t a single inch of it that hasn’t been affected by plastic in one way or another.

What does plastic do to the ocean?

Once the plastic makes its way to the ocean, it continues to slowly break down creating microplastics. These are easily ingested by marine life, and they will continue to make their way up the food chain – eventually ending up on our own plates.

And it doesn’t even matter if you’re vegetarian or vegan since traces of microplastics have been found in water, beer, air, and salt! It’s been found that people generally consume up to 50,000 plastic particles per year.

Another issue of broken-down plastic is the toxic chemicals it releases. Some of these harmful chemicals such as Bisphenol A have been found to disturb our hormonal systems and disrupt the growth and development of other marine life.

How does trash affect the ocean?

The trash in our oceans isn’t the only issue. The waste sitting in our landfills is the third biggest source of methane emissions in the U.S. alone, which is even more harmful and potent than carbon dioxide.

This also negatively affects ocean life since methane is one of the top causes of the rising temperature issue. This hugely impacts our oceans as the impending sea-level rise, and the tropical storms threaten many areas, particularly coastal locations.

The temperature rise is also affecting our coral reefs. Because the warmer temperature of the water is causing the corals to expel algae, turning them white. Plus, coral reefs that have been exposed to coral bleaching in hotter temperatures for more than eight weeks can become infected and die.

How does littering affect the ocean?

Littering also is a massive cause of ocean pollution. This is the type of waste you see lying on our beach or floating on top of the water such as plastic bottles, six-packs of plastic rings, and so on.

Another thing that pollutes our waterways is fishing equipment and abandoned fishing nets. These cause severe damage to underwater habitats and harms sea life such as whales and crustaceans who become tangled up in them.

How does pollution affect the ocean?

Another type of pollution is nonpoint source pollution, or otherwise known as runoff. This often comes from vehicles, farms, or septic tanks and often causes algal blooms, which eventually decrease the ocean’s oxygen levels and cause dead zones..

How Long Does Plastic Last In The Ocean?

Plastic takes approximately anywhere from 20 to 500 years to decompose, depending on its material and type. For example, a plastic bag might break down in two decades, whereas a plastic bottle that’s made from PET will take over 400 years to break down fully.

And even then, that plastic turns into tiny microplastics, which are often swallowed by other mammals and marine life.

Interestingly, plastic production on a larger scale kicked off around the 1950s, meaning that the plastic bags, bottles, and other items from back then are still found in our environment today. Plus, a single plastic bag usually has a “working life” of 15 minutes, but it lasts in our environment for a lifetime.

So How Does Trash End Up In The Ocean?

Now you may be wondering how all that plastic ends up in our oceans and waterways. Here are a couple of reasons:

Plastic and other forms of trash that find their way on the ground for various reasons get washed into storm drains during heavy rainfall. This will eventually make its way to our ocean.

There was also a study done back in 2017 that determined that just 10 rivers around the globe are the ones carrying the trash into our sea.

Things like wet wipes, paper, or anything that isn’t totally organic is a problem for our waterways when flushed down the drain.

This might be new to some, but our clothes shed synthetic microfibers when washing a load of laundry. Eventually, these also get into our waterways.

Which Countries Cause The Most Marine Pollution?

According to a study carried out in 2010 by Statista, China has the highest amount of mismanaged waste and plastic marine debris. It makes sense since 50% of the world’s plastic gets manufactured in Asia alone, and since China holds 18% of the world’s population – most of the plastic gets created there.

Keeping all that in mind, it’s important to note that China had set a target to have 35% of its plastic waste properly managed and recycled since last year.

The other top contributing countries include Indonesia, the Philippines, and Vietnam.

How Does Ocean Pollution Affect Humans?

Ocean pollution brings a ton of adverse effects to our health and wellbeing. For one, as we already mentioned how we consume an estimated 50,000 microplastics per year just through our food alone.

In heavily polluted areas, people have been known to get skin rashes, stomach pains, and other side effects from swimming there.

Ocean acidification is another significant issue caused by plastic pollution. Not only does it affect the proper development of marine life, but it impacts man-made industries such as the American shellfish and oyster industry—as the harvest is slowly decreasing, causing major economic harm.

While it’s difficult to clear all the waterways of plastic, we can take steps to reduce our plastic consumption. Here are a few simple things you can start doing today to help combat plastic pollution.

Go as Zero Waste as Possible

Here at Trash Backwards, we are all about a zero-waste lifestyle!

This means reducing the amount of plastic you consume daily by replacing it with more reusable and sustainable alternatives. Things like bringing your own reusable bags while shopping or buying a reusable coffee cup can really make a difference.

If you must use some plastic products, make sure to recycle them properly after. Also, avoid throwing trash into already overflowing bins since they can wind up in our waterways during storm runoff.

Avoid products that contain microbeads, as they get washed down our drains and end up in our lives, lakes, and eventually the ocean.

Try using natural organic fibers instead of microfibers where you can. Also, if you wear synthetic clothes, try washing them by hand or on a gentle cycle. You can also install a microfiber filter which is designed to catch them before they drain away.

If possible, try to use organic and natural products in your garden as fertilizers, and toxic weed killers are harmful once washed into the sea. Plus, shopping organically where you can also is a great step to take.

Be as vocal as you can. Inform your friends and family about this growing issue and ask companies to stop using wasteful packaging methods.

While the amount of plastic in our ocean sounds daunting, it’s important to know that you can still do a lot to change this.

Living a more sustainable and zero-waste lifestyle is a significant step you can take – and it doesn’t have to be complicated or expensive!

Let us know your thoughts in the comments below and thanks for reading! 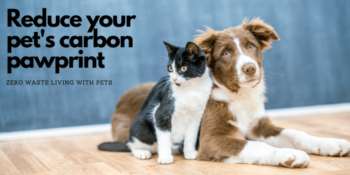 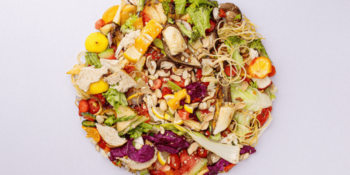 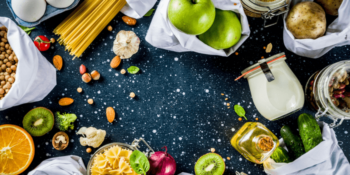 TrashBackwards (trashbackwards.com) is a participant in the Amazon Services LLC Associates Program, an affiliate advertising program designed to provide a means for sites to earn advertising fees by advertising and linking to Amazon.com. As an Amazon Associate, TrashBackwards earns compensation from qualifying purchases. All data and information provided on this site is for informational purposes only.

**Amazon, Kindle, Echo, Alexa, Dash, Fire and all related logos are trademarks of Amazon.com, Inc. or its affiliates.